How Shaving My Head Bald Changed My Life

I never would have thought in a million years that I would end up shaving my head bald, but it happened. I wouldn’t change it for the world because the day I decided to let go of my hair was the day I truly learned to love myself.

It’s odd how something dead (like hair) can have such a huge impact on our confidence and overall feeling of happiness and sometimes I feel a bit conceited for being so “into my hair”.

On October 28, 2011, I shaved my head and the impact it had on me was more intense and sudden than I ever thought possible.

Although some emotions are negative, the effects of shaving my head weren’t all bad!

My Self-Esteem Did Drop To Zero

Even with constant color changes and the obvious damage that came from lack of care, I was one of those people that didn’t mind as long as I wasn’t bald. Now, here I was with no hair. I’m pretty sure my mom said I had more hair when I was born.

I no longer felt feminine. I thought I would look ridiculous in a dress and heels because I didn’t have my favorite accessory: my hair.

That night, after shaving my head bald, I cried myself to sleep and I think part of the reason for that was because I felt like I’d lost a part of my soul.

I know, it’s a bit dramatic, but I’m just keeping it real.

I felt ugly, I felt a huge pang of regret and it wasn’t until I felt my bare head that I realized there were other things I could have done to avoid the trauma and shock I was feeling at that time.

I Started To Appreciate My Hair

See? Told ya it wasn’t all bad. This was definitely a big one for me because I used to hate my hair. As a matter of fact, it’s one of the reasons I decided to shave it off in the first place. Once my coils were gone, I definitely started wishing I could have my hair back faster.

Once it started growing in, I began to get “hand-in-hair syndrome” because not only was this confirmation that my hair would grow back, it was also super soft, the softest it’d been in years!

As a kid, I was a tomboy. I hated having my hair combed (and not just because it was painful) and would often go days without combing my own hair once my mom gave up the task. I didn’t care about what my hair looked like and I’d always been that way.

That was, until I had no hair and couldn’t figure out what else to do other than put on a hat.

Once I learned to appreciate my hair, I wanted to learn as much as I could about how to take care of my hair so I could not just get my hair back, but to get my healthy hair back.

It really made me start thinking about what I was eating as well as what kind of products I was putting on my hair.

It Forced Me To Get To Know Myself

Without hair, I had to do some serious soul-searching to figure out what was so great about me as a person because I was starting to get tired of being sad all the time. Digging deep allowed me to find beauty within myself that didn’t require the presence of hair.

I’m naturally a social butterfly so isolating myself for weeks at a time was starting to eat away at me mentally. I just couldn’t take it anymore. I needed an outlet.

I started meditating and doing yoga in order to ditch a large amount of the stress I was feeling.

I learned why I was so frustrated with my hair (it was super hard to manage and would take me hours to do even when it was short) and learning this allowed me to begin searching for solutions.

I Realized I Wasn’t Alone

A few months after shaving my head bald, I relocated to an area where there were more African Americans. When I got there, I realized I wasn’t the only one rockin’ natural hair! (Gotta love the East Coast)

For the first time in months I didn’t feel alone or like what I’d done was only something a psychotic person would do.

For the first time I realized that being natural wasn’t just a fad… it was a lifestyle. Being natural (apparently) was about more than looking cute. It was about embracing your hair as part of yourself as a whole and learning to be proud of it instead of using chemicals to hide the true texture of your natural hair.

It was a good feeling when another natural would nod in approval as they walked past, like some unspoken pact. It made me feel welcome instead of being shut out and that was such a strong feeling that I officially decided to continue on my natural hair journey.

Not sure what makes hair care a journey? Check out the post, “What Is A Hair Journey?”

Would I Consider Shaving My Head Bald Again?

Considering something and actually doing it are two completely different things. Although I no longer regret shaving my head, I don’t think I would actually do it again, but IF (strong “IF”) I did decide to shave my head again, it most definitely would NOT be during the freezing West Coast winter months (sometimes it starts snowing as early as September).

I won’t ever say never, though, and only time will tell whether I’m going to feel bold enough to take the plunge and shave my head again.

What emotions did you feel after doing your big chop? How has the view of your hair changed for you as a result of your big chop?

Leave your comment below! Your story may inspire someone and help them on their hair journey!

Here’s to your fantastic 4 kinks! 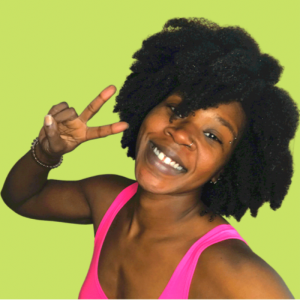 Sharing my natural hair journey with hopes to inspire you to find what makes your hair happy in order to reach your hair goals.

Novex Hair Care: I Tried The “My Curls” Line For A Month

My Hair Journey Update Volume 1: Where I’ve Been (And My New Experiment)

8 thoughts on “How Shaving My Head Bald Changed My Life”

Sharing my natural hair journey with hopes to inspire you to find what makes your hair happy in order to reach your hair goals.

How To Get Wash N’Go Hair